0.4 A whole continent to restore

Update 0.4 represents our efforts to radically redesign the metagame. Rather than a list of levels, you now have a whole continent to restore. Different territories will slowly come to life as you complete them allowing you to get a much better sense of completion than before.

Hello , im starting to get into development, and would like to know if this runs on jave/jhson or something similiar, on the long sight i would like to develop mods for it.

The game is being developed in Unity, which prefers that one uses C#. It doesn't currently have mod support (at least, not officially), but this may be added in the future.

A really great game with an interesting concept. However, I seem to have run into a major bug in the Mac version. Currency is not displaying on any part of the UI (both amount left and for individual building costs) on any of the maps, which means I don't know how much currency I am spending or how much I have left.

Also the button for zen mode isn't able to be clicked.

Thanks for the feedback :)

1. In the below screenshot, the lower-left water pump's preview appears not to be tracing a water path through the space to its bottom-left. When placed on the map, it behaves as expected. 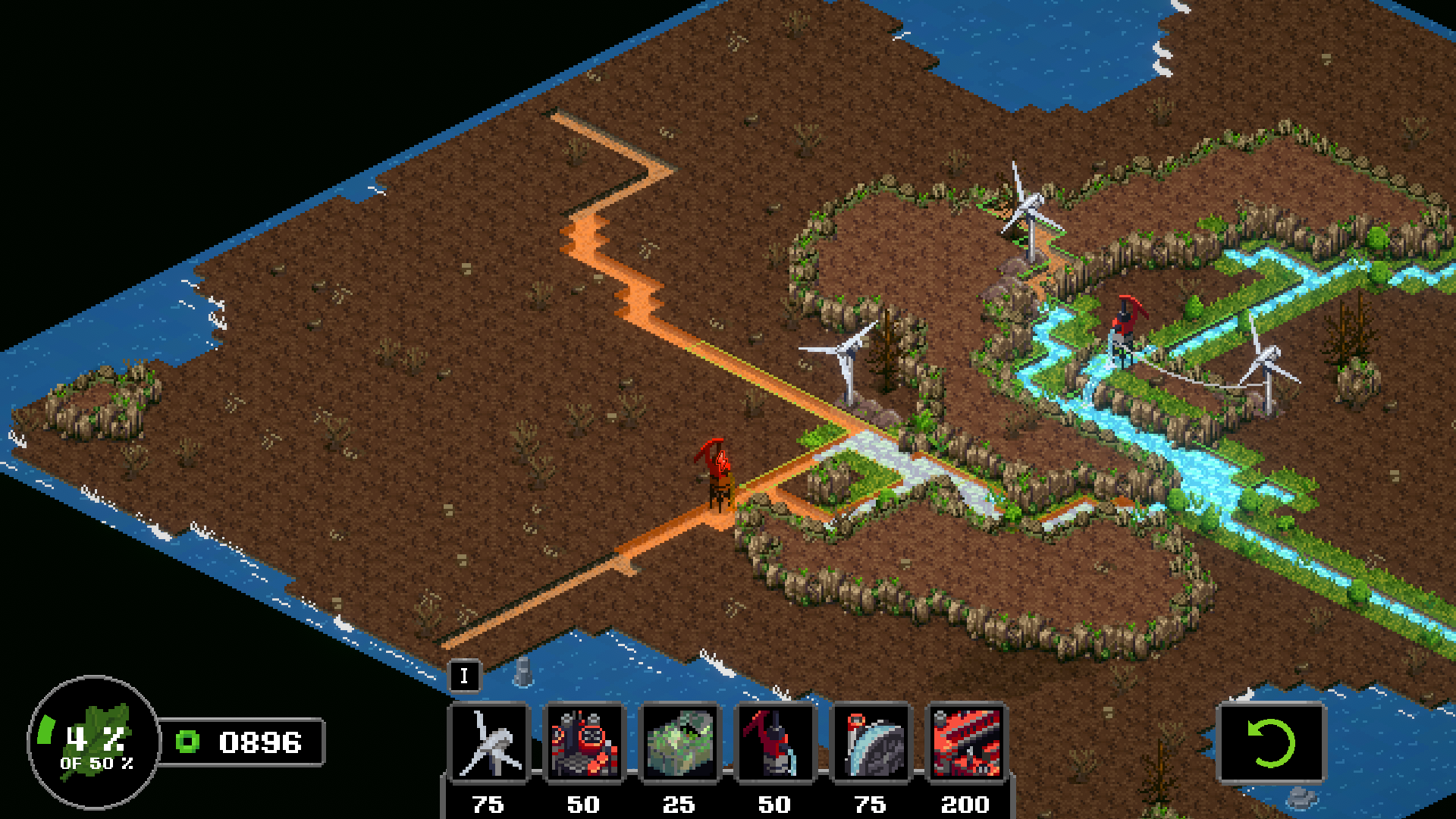 2. Let's say that you start a fire, and while the fire is burning, you place another building and then undo it. Looks like the game doesn't correctly restore the gamestate to before the building was placed.
In the screenshot below, after performing the above undo, some areas transformed from burnt ash to fertile soil, although before the fire they had been greenery. See the areas between the fields of ash.

If I had to guess, that might be caused by applying buildings to the map in the wrong order after undoing a move. 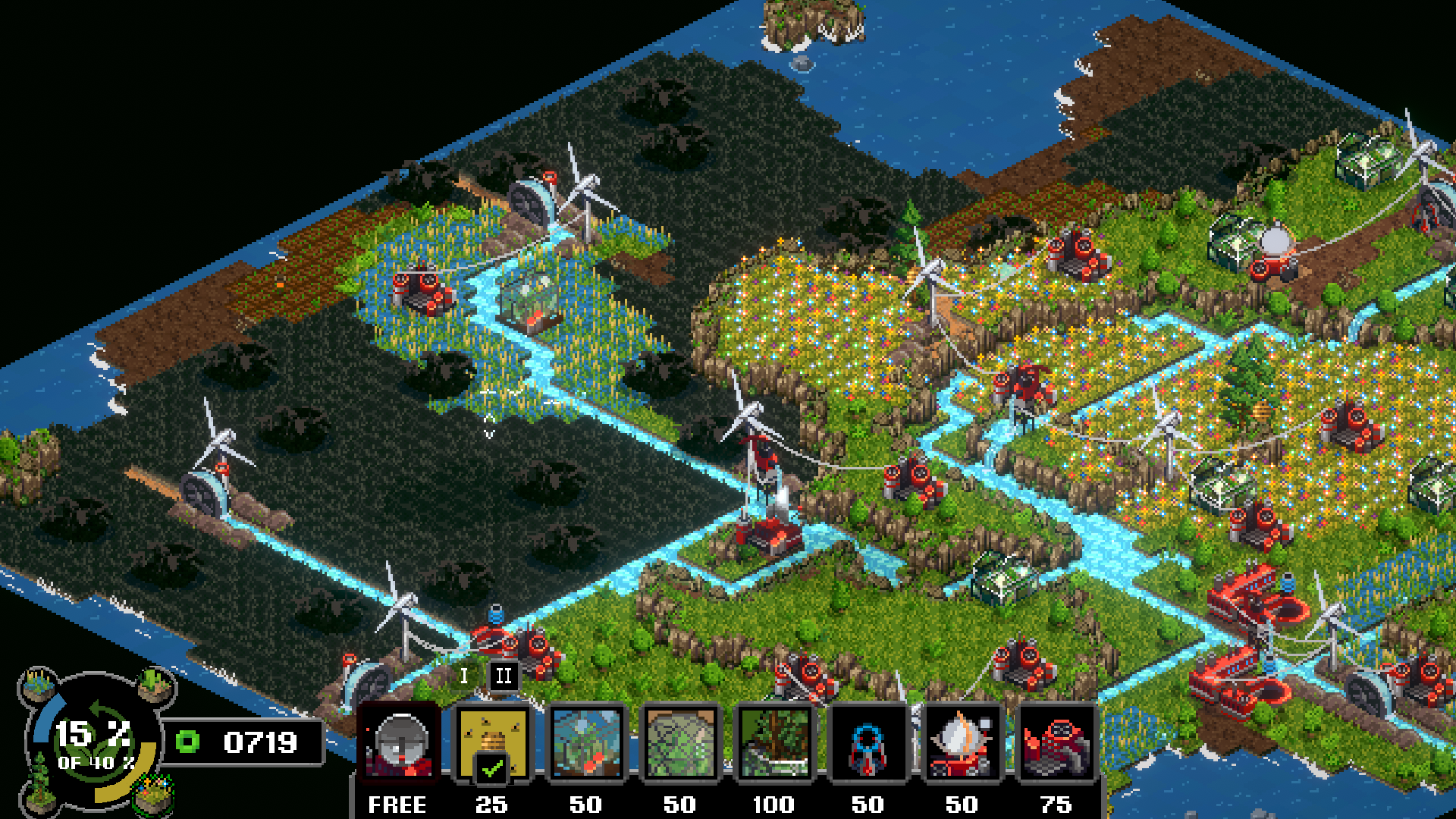 3. In the below screenshot, the greenhouse's price preview is wrong. (A greenhouse costs $25, but the preview says -29.) Not sure why. 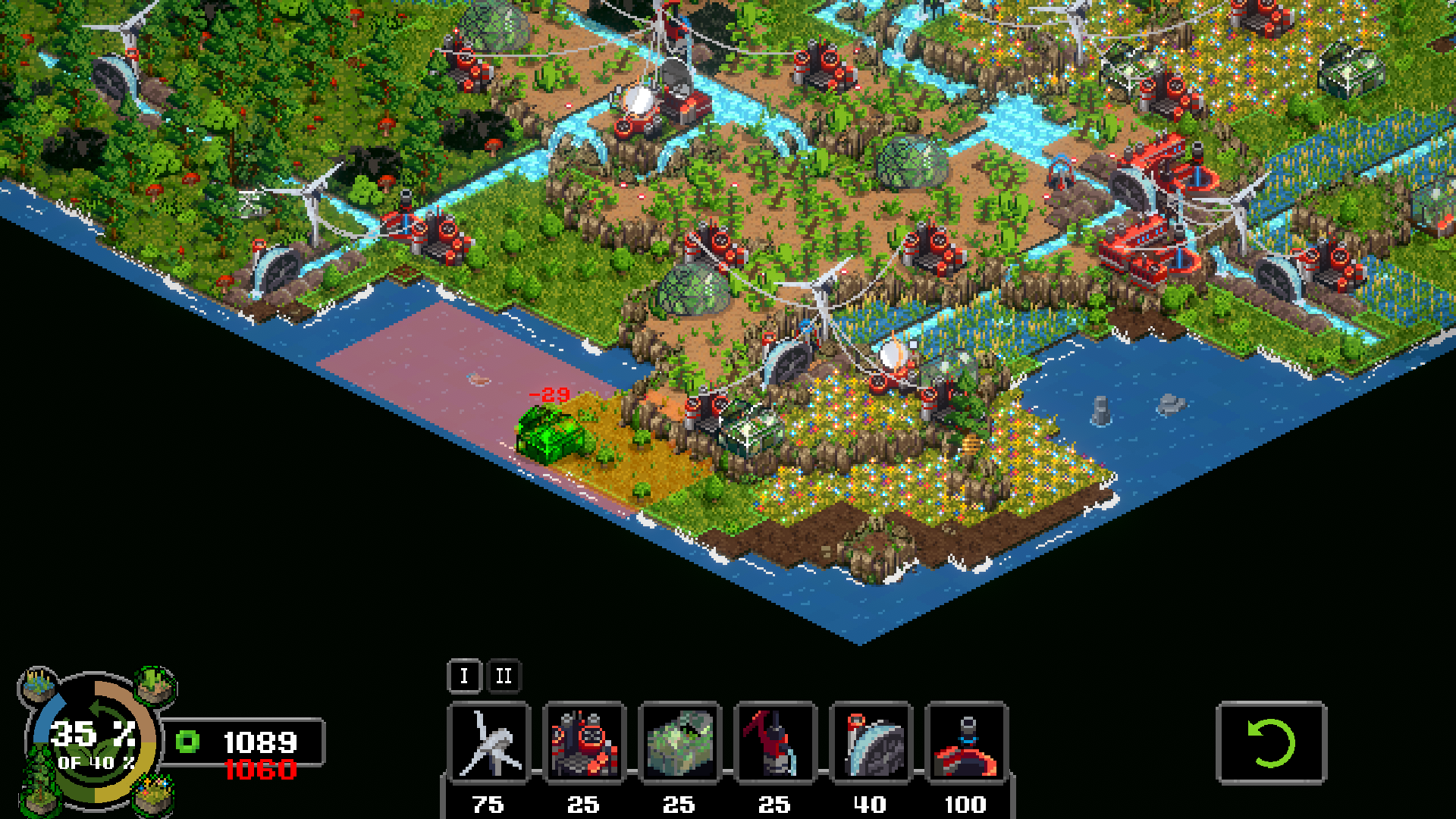 4. During Tier 3, the UI lets you build a Hangar multiple times, although there's only one place to put it and you only need one.

5. During Tier 3, if you recycle a Steam Generator, it might be worth detecting which terrain was next to it? In the screenshot below, there's a dry riverbed in the upper-left (because it didn't rain after recycling), which maybe should be filled in with wetlands instead of riverbed. Possibly only if none of the surrounding spaces are rivers, though. 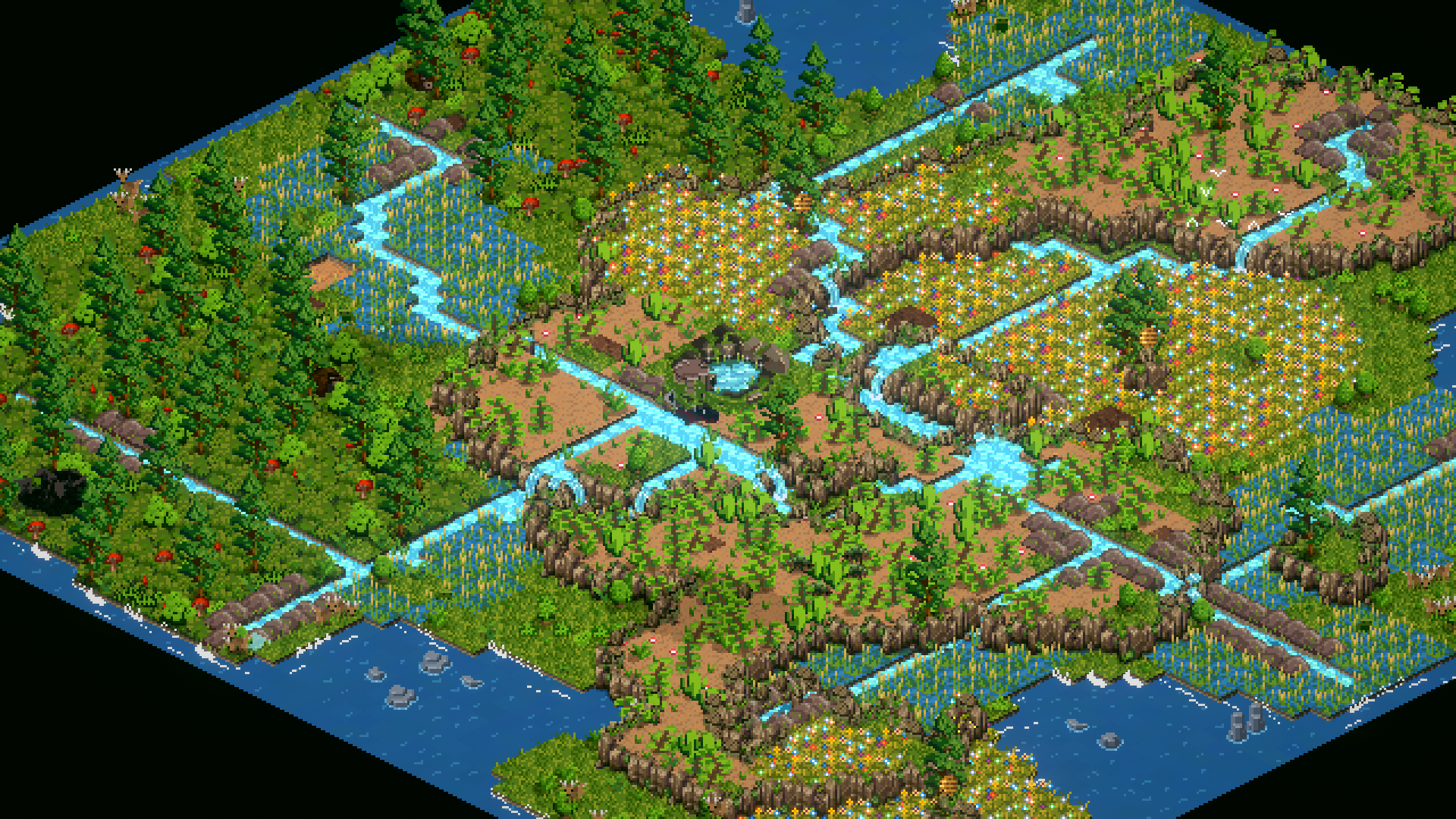 Thanks again for making this game! It's been a ton of fun so far. (Took me so many tries to finish the Island.) I'm really looking forward to what you'll add in the next version!

Jeez, thanks for all this feedback :D

There are definitely issues with the water pump preview, thanks for pointing that out

Ah, the dessicator bug has got to do with the way the game is loaded! Thanks

Good points on the hangar.

I kinda like that the steam turbine leaves riverbed, it allows the landscape to tell a bit of a story. But I'll think about it.

Water pumps do go further on elevated terrain but that's not turtorialized :P

I can change it so that ESC hides the text once the game is complete :)

Thank you so much for this, it warms my heart and the team loves it as well that you are providing such wonderful and detailed feedback. I hope the game continues to provide you with fun :D

No problem! I hope these little things help make it the best game it can be!

amazing. such a unique game. i hope you keep making amazing games (this one or whatever). :)

I can't see the continent... when my game opens I'm very zoomed in and can only see a few pylons. :(

Nevermind, turns out I was running the wrong version!

Hey, this game is pretty cool! Really enjoyed how the continent gets greener and greener as you restore it, thumbs up for that.

very enjoyable to chill and see the birds fly by after you restore a piece of land!

Terra Nil was enjoyable before, but a bit unbalanced and still felt like a demo. Now though, it feels like a proper game and it's soooo satisfying seeing the barren wasteland on the menu screen slowly change into restored habitats!

Thank you so much <3

Your game gets better and better with every update. The concept is so fresh and unique. And the pixelart is so beautiful! I enjoy following development and look forward to every new update. Great work! :)

Thank you :) that's wonderful to hear