This is going to be a short one, sorry in advance - I'm moving house at the moment.

I have two interesting things to show today, the first is that I've created the element selection interface, so we're that much closer to the release of the next build ;) see gif below:

As you can see, the selection of elements takes place just before the ability selection stage. I wanted to be able to show both the base element and tower in the same selection area, but I didn't want to have to redraw/reanimate all of the combinations of element/tower. In order to get around this, I made use of some of Unity's interesting UI features. The first thing I did, was I created a 64x64px circle and cut it diagonally.

Then I used the UI mask class https://unity3d.com/learn/tutorials/topics/user-interface-ui/ui-mask to only show either the bottom/top of the tower/element. Then, I wrote a little script to convert from images from my sprite animator script to something that could be displayed on the UI - so I didn't have to reconfigure the animations. Finally, I messed around with the positioning to make them look good and added a background. I'm not much of a UI person but I'm fairly pleased with how this turned out.

The second thing I wanted to mention is far less concrete. I have been getting the feeling that the current art is not really a consistent style. The ice tower is very different to the fire tower, for instance. For that reason,  I've been experimenting with a new, consistent, art style for the elements/towers. The new style is simpler and cleaner, with far greater focus on depth and less focus on texturing. I also think it's probably more appropriate for a casual game like Element Crush. Below you can see 3 towers with the original, redrawn with outlines, and without outlines. I'm not very happy with the fire tower, if I do go with this new style, I'll redraw that one. 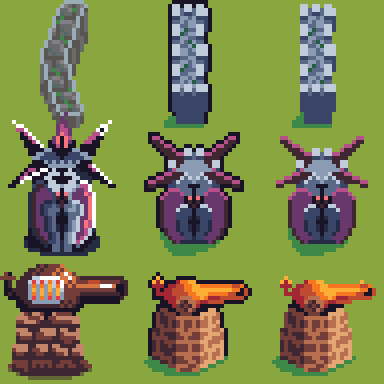 Thanks again for reading, and keen to hear your thoughts