Over the last little while, I've been hard at work implementing the towers for the new art. So to illustrate, here's a little video of the light and dark towers in action.

The first thing I discovered when I implemented these together is that the light tower adds an awesome twist to the game, it felt really good to play. The positioning element of the game has always been important, but with the light tower it's paramount. It only buffs towers in the 4 adjacent squares, so each of those squares you're not using - where there's only a basic element or something - is wasted. Also, the towers stack with each other, so a single non-light tower can be buffed by a max of 4 light towers, one on each side. I found myself having these grids of light/non-light trying to optimise my build. The second notable thing is that light/dark towers is that they have great synergy, maybe too good, not sure about the balance yet. Dark towers have high range, high damage, and low attack speed. Light towers buff attack speed. Craziness ensues.

Another new feature I needed to build when I built the light tower was a buffs system. Towers can now receive buffs to their attributes, and a buffed tower will have a little chevron next to its bottom left corner like this: 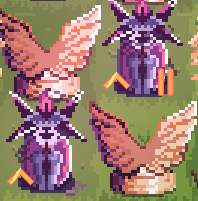 To find out what the buff actually does, you need to hover over the tower and then the buffed attribute will appear in green. I wanted to created the chevrons so that a player could tell at a glance (in the third read) what towers were buffed and didn't have to hover multiple times to learn the rules of a tower. The chevron itself was inspired by Darkest Dungeon's - a game I've really been enjoying recently. I've also modified the level indicator colour to match the chevron, and given it an outline.

Bonus for today:
Some more new art, this time, Ice and Lava elements. I haven't created their corresponding towers yet, but we will be seeing the first slow and splash towers soon ^^

I've been struggling a bit with the cadence of these devlogs. I've been trying to aim for one every week(ish). Is this frequency working? What do you guys think? Would you like (less formatted) smaller updates more often? A picture here, a few lines there? Let me know!

As always, thanks for reading and I look forward to your feedback