Hey everyone, another round of updates

I've got two more new towers for you, with all new synergies.

- The fulcrum tower, which I've mentioned before, but has new art following some feedback from the wonderful people on our Discord server
- And the ice tower, a brand new tower and the first tower in the game to debuff enemies 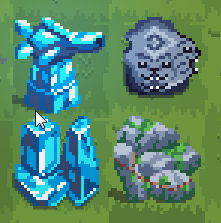 First off, let's have a little look at the fulcrum tower in action. It will split the shots of any [b]horizontal firing[/b] tower behind it. Most notably, this means that fire towers can now hit lanes other than their own as illustrated. In order to keep this balanced, the fulcrum tower will multiply the damage of any shot it splits by a factor. At level 1, this factor is 50% - which means that the shots it splits are half as powerful (however, if all three projectiles hit, it's technically dealing 150% of the base damage). Also, when the fulcrum tower is leveled up, the factor increases, currently by 15%. What this does mean, however is that the progression goes 50%, 65%, 80%, 95%, 110% ... So a level 5 fulcrum tower (and up) increases the damage of the projectiles it splits - just something to keep in mind.

The second new tower is the ice tower, and you can see it in action here. This is less complicated, and behaves exactly like the fire tower (i.e. only shoots horizontally) with some notable differences. The first is that its shots slow enemies, the slowed enemy turns blue and is slowed by a factor for 4 seconds. If the slowed enemy is hit again, the slow is refreshed. At level 1, the slow is 50% and it increases by 10% each level. The slow is capped out at 90% (level 5+) otherwise there would be enemies that didn't move or moved backwards(!). In order to balance this, both the damage and the attack speed of the tower are very low, the lowest in the game. Also, because the firing pattern of the ice tower is identical to the fire tower, its projectiles can also be split by the fulcrum tower.

Finally, I want illustrate that the fulcrum towers stack. Having multiple fulcrum towers in the same row will result in projectiles being split multiple times. It's worth noting that the damage multiplication happens with each additional split, i.e. if there are two level 1 fulcrum towers in a row, the projectiles from the second will only deal 25% of the base projectile damage. This reduction does not affect the slow from the ice towers. Regardless of these factors, I've still found multiple fulcrums to be very strong, and they look [b]awesome[/b]. See for yourself:

One last thing this week, would people be interested in a different branch of Element Crush where these new features I'm currently working on are available, but not necessarily stable, and the leaderboard is disabled? Let me know! As always, thanks for your support and I look forward to hearing what you think