Fateful Dealings is a systems driven card RPG where you play as one of the recently deceased. You look back on your life and the choices you have made to determine where you'll end up at the time of the final reckoning. It's inspired by the likes of Cultist Simulator.

Requires a mouse: click, hover, drag n drop.  Drag and drop resources into the middle to use them.

Well this was stressful.

I stopped reading the cards when I realised that you lose cards cause it's timed, and just started klicking randomly. I apparently lived an evil life.... sure would've been great if I'd actually been able to stop and read about what happened in said evil life, but oh well.

It kinda ruined the experience for me tbh

The timers make me anxious and there were some cards where even though I had the requirements, I could not click them.

Yeah, you have to like, pull the required cards in front of the choice that you want sometimes.. or something

Nice concept. I had to download and use wine to play it on Linux since the browser version would work neither with Firefox nor with Chromium.

The timers are annoying though - I do not think they add positively to the gameplay but they cause me to just skip reading most of the texts. Also with the timers, the cards should better be automatically arranged so that the shortest timer is always played first. At least something should prevent the cards from obscuring each other.

I like that this game being designed as browser-version, the music sounds cool while the overlayed timers on the bottom look quite less perfect in aesthetic.

While that green-bordered hints of useable cards gets the decisions bit more positive & maybe a pause-button could be added / if the player hovers over a card for reading its lines, it would be awesome to get that timers stopped until the card getting unhovered by the player's pointer?

I really like it. My only down note is the timers move too fast, I can't read the text and enjoy the story while panic stricken.

I sadly can't play it.

"An exception has occurred, but exception handling has been disabled in this build. If you are the developer of this content, enable exceptions in your project WebGL player settings to be able to catch the exception or see the stack trace."

Pops up just after the Unity splash screen.Tried it in Firefox and Chrome on Windows 10.

This is brilliant! Thanks for your work.

Great game,  although it didn't work for me in Chrome on Windows 10 (worked fine in Firefox though)

I'm using basilisk (close to firefox), while my laptop being win8.1 and the webversion was loading with no issues?

Hey! Sorry to hear that, do you think you could try in a different browser for me and tell me what happens? Someone reported this error in Chrome on Mac

When I get a chance I'll do a downloadable Windows build :)

Well, the sound effects and background music are awesome in setting the mood. The thud sound for a card being placed on the table was well chosen. I felt the rain sound effect had too strong an attack, so I interpreted it as a keyboard typing sound at first; when the gameplay started, it became slightly more obvious it was describing the rain. The music with sustained strings feels mysterious and matches the visuals nicely.

However, I couldn't quite understand how to play the game. Maybe a bit more in-game onboarding might help. Perhaps try introducing one mechanic at a time if that's possible?

Just noticed it was a LudumDare submission, so I understand the entire game was created in a short period of time. Despite that, your game has animations, music, sounds, narrative, graphics--so it's quite an accomplishment, I must say.

Thanks so much for all the feedback! :)

yeah, LudumDare's can be like that. Just play the game for a bit, and read everything

It took me a while to figure out you have to put the cards on the symbol in the middle of the table, I kept trying to place them on the options. Sometimes there's a bit of a bug if other cards are moved up the table because then the symbol doesn't read.

Thanks, I'll update the description. 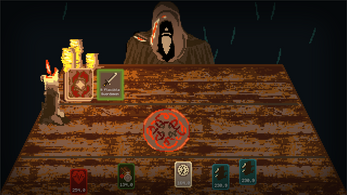 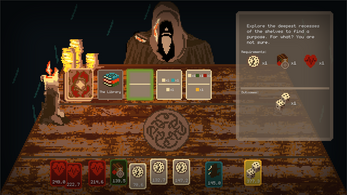 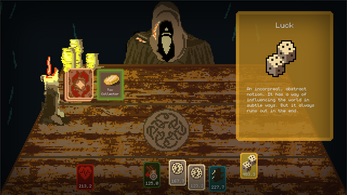