A downloadable game for Windows and macOS

Parthian Tactics is a turn-based tactics game with a heavy focus on strategy. Inspired by the likes of Advance Wars, players deploy armies composed of cavalry, infantry, and archers, and wage war across procedurally generated environments. Grab a friend, and get ready for some hotseat multiplayer action!

- Infantry beat cavalry but are weak against archers

- Cavalry decimate archers, but are brought up short against infantry

- Move furthest on road, but have the worst defense

- Grassland provides neither good defense nor does it inhibit movement

- Forests provide excellent cover but take time to move through

- Mountains are perilous to cross but provide the best defense

- Water is impassable by all

- Castles, key strategic points, which allow units to be healed

This game was made as part of a project to make a game a week. However, this has spanned about two weeks as I wanted to make it a more complete game. But, like all the other games before it, all of the art, scripting and design were done by one person.

Music for this game came from TeknoAXE

And sound effects from OpenGameArt.org

- Each player moves all of their units in a turn

- The green icon next to units shows which units have moved.

- Holding down the space bar will show the extent that all the units on the map can move.

- ESC to bring up the menu. 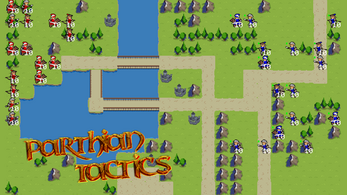 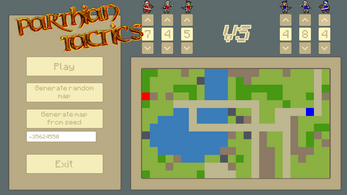